During the time when Carl Rogers was first developing his person-centred therapy – in the 1940s – another US psychologist, Abraham Maslow (born just six years after Rogers), conceived an idea that has become known as ‘Maslow’s hierarchy of needs’. 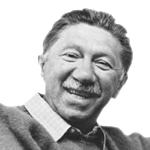 Published in a journal article for Psychological Review in 1943, this elegant model takes the form of a triangle shape when presented graphically, representing what humans need in order to be able to move towards self-actualisation, which represents the realisation of the person’s full potential. The layers represent the different types of human needs. These are divided into lower-order (or deficiency) needs and meta (higher-level) needs. 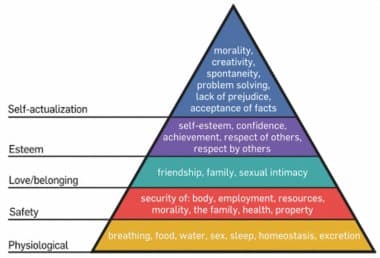 Maslow’s Hierarchy of Needs: How It Works

The idea here is that human needs have to be met from the bottom upwards, and that the lower four layers are all ‘deficiency’ or ‘lower-order’ needs – so that, for example, a person who doesn’t have enough food is not focused on needs relating to the higher levels.

You cannot exchange one need for another, for example the need to breathe air for the need to have shelter: each level of the triangle must be met before progressing to the next level. This highlights the importance of people having access to what they need at a more basic level before they can fully engage in counselling.

Thus, if a client presents to a counselling service with housing problems, for example, it will probably be necessary to signpost or refer them to an organisation to help them sort this out before they will be ready to begin counselling.

People would have to have all four lower levels of needs met before they could self-actualise (the only ‘growth’ or ‘meta’ need in the original model) – referring to the need to be moral, creative, spontaneous, able to problem-solve, tolerant, unprejudiced and willing to grow.

Examples of people who have self-actualised might be Nelson Mandela and Mother Teresa – in other words, individuals who have overcome personal difficulties to achieve great things.

Shortly before his death in 1970, Maslow added three additional levels of growth/meta need to his earlier model; these new ideas formed part of a book published posthumously, one year after he died.

Cognitive needs (for knowledge, reason and meaning) and aesthetic needs (for appreciation of and search for beauty, form, structure, life expression and creativity, e.g. in music and art) were inserted before self-actualisation.

While self-actualisation was seen to be the achievement of individual potential, self-transcendence focused on helping others to self-actualise and sensing a spiritual connection.

Abraham Maslow influenced the work of Carl Rogers, in particular in the seven stages of process (which track people’s development, including clients in counselling). Both men believed that human beings need certain conditions to be in place before they can reach their full potential and lead a fulfilled life.

Maslow’s theory fitted with Rogers’ childhood observation of the potatoes that – even when kept in unfavourable conditions in the cellar – demonstrated a tendency to try their best to grow. It fitted too with Rogers’ experience working with disturbed children, war veterans and other clients.

Rogers adopted the self-actualisation concept and integrated it into the person-centred approach. He believed that as clients overcome barriers, they move towards becoming a more fully functioning person by means of the actualising tendency, spurring them on towards self-actualisation.

The concept of the actualising tendency is commonly associated with Maslow and Rogers, but in fact it was first introduced by Kurt Goldstein, a German neurologist and psychiatrist, in 1934 in a book entitled The Organism. However, the idea did not gain traction until 1943, when Maslow’s paper was published.

Many people assume that all humanistic psychologists think the same, but in fact there were differences between Goldstein’s, Maslow’s and Rogers’ views of the actualising tendency. Goldstein first put forward the concept as a theory of motivation, whereas Maslow related it to the human desire to be the best that you can be.

Maslow also asserted that certain conditions needed to be fulfilled – that is, meeting physiological, safety, relationship and esteem needs ­– in order to self-actualise. Maslow believed that only 1% of people reach self-actualisation.

In 1959, Rogers outlined his own ideas on the actualising tendency in a book chapter, ‘A Theory of Therapy, Personality and Interpersonal Relationships’.

While he shared Maslow’s values relating to the intrinsic goodness of human nature, and the innate capacity of individuals for personal growth, he disagreed that the actualising tendency was self-driven and automatic. Instead, Rogers argued that people need the right emotional environment in order to grow emotionally; in particular, we must receive empathy, genuineness and acceptance.

Rogers wrote about this too in his final book, A Way of Being, in 1980, seven years before his death. He illustrates this with the story of potato plants kept in unfavourable conditions, which nonetheless demonstrated a tendency to try their best to grow.

Other Works by Maslow

In his book The Farther Reaches of Human Nature, Maslow also described the Jonah complex (named after the biblical character who tried to escape his destiny). This complex is a fear of success, which prevents self-actualisation, sentencing the person to mediocrity.

In addition, Maslow described peak experiences – moments of euphoric mental state achieved by people who are self-actualising – in a 1961 essay entitled Religions, Values, and Peak Experiences.

Maslow A (1971) The Farther Reaches of Human Nature. New York: The Viking Press2