A counsellor will at some point engage a client who is suffering from Stockholm Syndrome.

Abusive relationships and domestic violence situations are everyday examples where Stockholm Syndrome may be hiding. 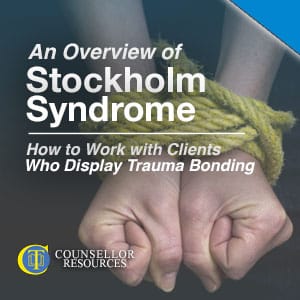 In this online CPD for counsellors article, we will look at:

“If you tell a lie big enough and keep repeating it, people will eventually come to believe it.”

The Nazi regime manipulated a whole society into believing a lie; as a consequence, millions of people were murdered. 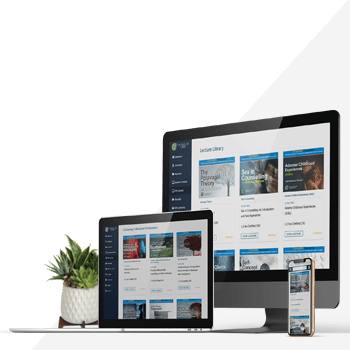 The name, Stockholm Syndrome, dates from 1973, when two men held up a Stockholm bank at gunpoint, taking four hostages.

Despite being held in a bank vault for six days, strapped with dynamite, the hostages feared their police rescuers; one later became engaged to one of the criminals; and another raised money for their legal defence.

Stockholm syndrome was the term coined by psychiatrist and criminologist Nils Bejerot, who was well-known for his work on drug abuse.

In counselling cases involving Stockholm Syndrome, it is important to note that it is not a recognised as a model of mental health illness, simply because there are no long-term studies, given that hostage-taking is a fairly rare event.

However, it’s thought that the effects are linked to well-known pieces of psychology research such as the Stanford prison experiment and Leon Festinger’s cognitive dissonance.

Although victims may disclose abuse, the trauma bond means that victim may also want to receive comfort from the very person who abused them. It’s a peculiarity of the way our brain works.

Within counselling engagements there may be examples where abusers build trauma bonds with their victims by:

This can happen due to the survival brain. If we’re in a stressful situation, our limbic system (the middle part of the human brain) kicks in and is interested only in keeping us alive – not in the future consequences of that.

It does this by adopting one of five positions that we can take when we’re under stress: friends, fight, flight, freeze or flop.

The ‘friends’ response involves looking to create bonds to lessen the impact of what’s happening. This can create a very complex situation where the abuser uses both fear and the relationship with the victim, creating cognitive dissonance. It can lead to long-term effects in the individual concerned.

Examples of Stockholm Syndrome in counselling

In counselling engagements, the following types of statements by clients are possible examples of the presence of trauma bonding: 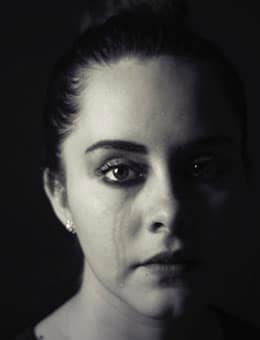 It is important in counselling to normalise how trauma-bonded clients feel, explaining that they’re not the only people in the world to feel this way in that situation.

While this might go against some modalities of therapy, such as person-centred therapy, in which you’re supposed to be non-directive, psycho-education can be such a relief to a client.

You could also explain what you know about trauma and survival if you’re confident enough and understand the mechanisms of the brain.

Psycho-education can also be useful in the treatment plan when working with clients who have felt some sexual pleasure during a sexual attack.

You can explain that their body was reacting in the way it was designed to, and that our sex organs are designed not to be able to be switched on and off independently. Just because the person got some pleasure from something does not mean that they were collaborating in it.

Do acknowledge and gently challenge any distorted views the client may hold about their abuser. This is always very difficult, and needs to be done with real care:

Therapist:       ‘Everybody makes mistakes. Even if you did make a mistake, is it right to be hit for that?’

Being fully present with clients, in their frame of reference, is vital during counselling– emotionally ‘holding’ the client while they talk about their experience, using Petruska Clarkson’s re-parenting style.

This allows you to begin to work with the negative self-concept that the client presents, as a result of the way the abuser has treated and addressed them.

It is important to normalise how trauma-bonded clients feel, explaining that they’re not the only people in the world to feel this way in that situation. While this might go against some modalities of therapy ... psycho-education can be such a relief to a client.

Issues such as self-blame, anger, confusion, confliction and denial are common. It’s possible to contract for how the client may safely express anger within the room.

Confusion often occurs as the client is trying to re-find their real self, which has been buried under an avalanche of negativity and abuse.

Confliction arises from love being a hugely powerful emotion, even when a relationship is flawed.

And denial occurs when clients refuse to see that being hit is a bad thing.

Other examples of therapy work with trauma-bonded individuals include:

One way of working with that last point is to say to clients: ‘While you’re doing the work here, what work is he/she doing? Is he/she in therapy? Is he/she changing?’ This can help the client see how much the perpetrator really is likely to have changed.

Before working with a client with attachment bonding, it’s important to ask yourself a number of questions:

Being willing to refer if the client’s needs are beyond your competency level is an important part of working safely and ethically as a counsellor or psychotherapist.