The humanistic approach to counselling is sometimes referred to as the ‘third force’ of psychology, a term coined by American psychologist Abraham Maslow in 1968 – the first force being psychoanalysis and the second behaviourism. 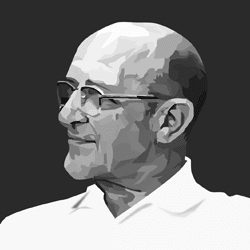 Carl Rogers adopted humanistic theory into his person-centred therapeutic model. Tudor and Merry (2006, p.68) note that ‘it was significant for the later development of his ideas that Rogers’ first graduate training was at the liberal Union Theological Seminary in New York and that he was attracted to and encouraged in unorthodox thinking’.

Rogers first explained his developing theory in a Minnesota lecture entitled ‘Newer concepts in psychotherapy’. Thorne and Sanders (2012, p. 12) report that ‘he subsequently came to consider the date of this event as the birthday of client-centred therapy’.

There – to an outraged audience – Rogers criticised the traditional approach to therapy, particularly the practice of directive advice-giving (which was part of both Freudian psychoanalytic and Skinnerian behaviourist approaches), and advocated ‘helping individuals to grow and develop’ (believing that everyone has the ability to trust in themselves enough to make their own decisions), an ‘emphasis on feelings and emotions rather than on cognitive aspects of a situation’, ‘a focus on the present rather than the past’ and ‘the crucial experience of the therapeutic relationship itself as a major element in the growth of the client’ (ibid., p. 13): all key features of the humanistic approach.

The Six Necessary and Sufficient Conditions

Alfred Adler’s work on change was a particular inspiration for Rogers’ 1957 article, ‘The Necessary and Sufficient Conditions of Therapeutic Personality Change’, which describes the conditions needed for humans to grow/thrive.

In addition to Rogers’ belief that all humans are born intrinsically good, he held that they are self-determining (i.e. the best placed to make decisions for themselves and to sort out their difficulties), so long as they experience the right conditions from others.

The three core conditions for this are empathy (i.e. understanding), congruence (genuineness) and unconditional positive regard (UPR: non-judgement). Although these are the best known, Rogers also proposed three further conditions required for effective therapy: therapist–client psychological contact (i.e. a sound relationship between the two parties); client incongruence (a mismatch between the client's experience and awareness, meaning that the client feels vulnerable or anxious); and client perception of the therapist’s empathy and UPR.

Rogers (1957, pp. 95–96) asserted: ‘No other conditions are necessary. If these six conditions exist and continue over a period of time, this is sufficient. The process of constructive personality change will follow.’

The term ‘core conditions’ was not in fact used by Rogers, but was coined later – in 1969 – by one of Rogers’ students, Robert Carkhuff. He ‘used it in the context of identifying from divergent orientations to therapy “core, facilitative and action-oriented conditions” by which the helper facilitated change in the client (or “helpee”)’ (Tudor, 2000, p. 34). Adding several additional ‘core conditions’ of his own, Carkhuff used the word ‘core’ to refer to their applicability to all helping professions, including – for example – social work, teaching and healthcare.

Describing how the term entered the world of counselling specifically, Tudor (ibid.) continues: ‘The term “the core conditions” was taken up by people much closer to Rogers than Carkhuff … and applied to three of the necessary and sufficient conditions and, although Rogers himself did not use the term, it has become part of the person-centred therapy lexicon.’

The Seven Stages of Process

Rogers’ model of the seven stages of process within the client describes how a person experiences a developing sense of sense and how open they are to self-change.

Feltham and Dryden (1993, p. 181) refer to the seven stages of process as one model of stages of change: ‘the marked phases which clients (or people attempting self-change) pass through … Rogers’ (1961) 'stages of process' runs from 1 ('remoteness from experiencing') to 7 ('experiencing effective choices of new ways of being).’

Individuals move, I began to see, not from a fixity or homeostasis through change to a new fixity, though such a process is indeed possible. But much the more significant continuum is from fixity to changingness, from rigid structure to flow, from stasis to process.

This theory provides a valuable common language with which counsellors can track client progress, and discuss this in both clinical supervision and case studies.

Rogers identified that the journey between stages is not linear, and that people move both ways. Tolan (2003, p. 112) describes this as follows: ‘It is rare to find someone who shows signs of being in only one “stage” at a time. At some points, a client might even seem to the counsellor to have “gone backwards”.’ By stage 6, however, progress tends to be more secure, and self-growth is then able to continue without the counsellor.

The seven stages of process describe an organic process and are not intended to be used as a framework to ‘push’ clients. Merry (2014, p. 59) writes: ‘There are no direct interventions that can be made or should be made in an attempt to move the client from one stage to the next to speed up the process.’

It was in 1951 that Rogers wrote Client-Centered Therapy, the first full version of his theory, which includes a chapter devoted to his theory of personality and behaviour (in the form of 19 propositions).

In developing this part of his theory, Rogers (1951, p. 482) drew on the work of other psychologists and on his own experience of counselling clients: ‘Taken as a whole, the series of propositions presents a theory of behavior which attempts to account for the phenomena previously known, and also for the facts regarding personality and behavior which have more recently been observed in therapy.’

The 19 propositions thus emphasise the key role in the person-centred approach of the phenomenological field – i.e. all that the organism experiences, consciously and otherwise; this is inevitably subjective and therefore not a precise reflection of any objective reality. Rogers writes (1951, p. 532):

This theory is basically phenomenological in character, and relies heavily upon the concept of the self as an explanatory construct. It pictures the end-point of personality development as being a asci congruence between the phenomenal field of experience and the conceptual structure of the self.

Merry (2014, p. 34) writes: ‘The nineteen propositions repay careful reading because together they provide us with an elegant theory of how and under what circumstances people change, and why certain qualities of relationship promote that change.’

Thus, the 19 propositions are of value to counsellors both in working with clients and in developing ourselves, since – in Kelly’s words (2017, p. 51) – ‘part of the counselling journey, specifically in PD [personal development] groups, is about encouraging those elements of our personality that are invisible to us – perhaps not-for-growth elements of ourselves – to come into our awareness, challenging us to look at them’

Rogers, C. (1961). On Becoming a Person: A therapist’s view of psychotherapy. London: Constable.