Feltham and Dryden (1993, p. 36) define ‘congruence’ as ‘genuineness, honesty exhibited by the counsellor as an essential part of her person and her work; likewise, the genuineness of the client’. 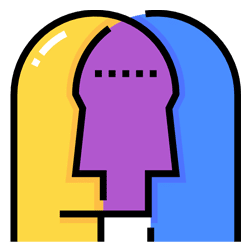 Icons made by Freepik from www.flaticon.com

Origin of Congruence as a Counselling Concept

The concept of congruence was first mentioned in relation to person-centred counselling. In the mid-1950s, psychiatrist, educator, and family therapist Carl Whitaker and colleagues – working in Atlanta, USA – developed the concept of a therapeutic attitude of genuineness or wholeness (Tudor and Merry, 2006, p. 29).

This was later taken up by Carl Rogers, who – in a 1957 article for the Journal of Consulting Psychology – published his ideas on what constituted the six necessary and sufficient conditions for therapeutic personality change. Conditions 2 and 3 relate to congruence, one in the client and the other in the counsellor:

This represented a sea change from the psychoanalytical approach, which had prevailed during the 1940s and in which the therapist specifically aimed to serve as a ‘blank canvas’.

Incongruence in the Client

‘Incongruence’ refers to ‘the discrepancy between the actual experience and the self-picture of the individual insofar as it represents that experience’ (Tudor and Merry, 2006, p. 72). They continue: ‘Incongruence develops and is maintained by the person through their selective perception of experience on the basis of conditions of worth.’

There are three process elements of incongruence (Tudor and Merry, 2006, p. 72):

Congruence in the Counsellor

Feltham and Dryden (1993, p. 36) write: ‘Congruence has long been regarded as an essential quality in the counsellor, since clients are sensitive to insincere or role-bound behaviour and are unlikely to be helped by counsellors who model a false self or defensive style.’

Rogers ­ recognised that if you are real and genuine with a client, they are more likely to tell you what is on their worried mind, because they perceive you as trustworthy. In this way, the therapeutic relationship is established and deepened.

When a counsellor is congruent, they also model this genuineness to the client. Thus, the counsellor’s congruence can act as to support the client to become congruent themselves.

Practical Tips on Being Congruent

The first step to this is that if you have made a mistake, own it, admit it and – if necessary – apologise. Covering up or not telling the truth because you are hoping the mistake will go away may very well lead you into more difficulty.

If justified, offering an apology to a client at an early stage may strengthen the therapeutic relationship, and you may avoid a complaint!

This is in keeping with the BACP’s Ethical Framework for the Counselling Professions (2018, p. 20), which states:

We will ensure candour by being open and honest about anything going wrong and promptly inform our clients of anything in our work that places clients at risk of harm, or has caused them harm, whether or not the client(s) affected are aware of what has occurred by … offering an apology when this is appropriate.