Cognitive Behavioural Therapy or "CBT" is a form of therapy created by Aaron Temkin Beck in the 1960s.

The history of CBT can be traced back to ideas of the Greek philosophers in the Stoic tradition.

The theory of CBT is based on the idea of a chain of events:

In other words, CBT is a model of ‘faulty’ (irrational) thinking.

CBT suggests that if we can challenge irrational thoughts with the evidence we can overcome our negative emotions.

Founded by Zeno of Citium around 2,000 years ago, Stoicism suggested that negative emotions were generated by errors of thinking.

Zeno asserted that ‘man conquers the world by conquering himself’. This idea forms the basis of what we now call ‘resilience’ in CBT.

Another Stoic philosopher, Marcus Aurelius – this time a Roman – is reported to have said: ‘Very little is needed to make a happy life; it is all within yourself, in your way of thinking.’

This philosophy gave Ellis the idea that humans have a tendency to think irrationally, based on self-defeating beliefs that lead to problematic cycles of behaviour. 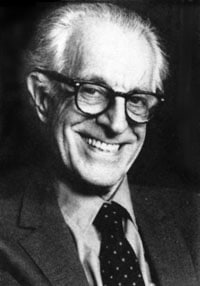 Ellis held both an MA and a PhD in clinical psychology from Columbia University. He was apparently a sickly child who lacked self-confidence, and he struggled as a young man to talk to women of his own age.

Wanting to find a partner, he decided to try to tackle his shyness by going to Central Park in New York and making himself talk to 100 women. Although he didn’t get a date from this, he became more confident about talking to women and managed to alter what he saw as his irrational fear.

REBT belongs to the behavioural school of therapy and is closely related to CBT. It is an active-directive therapy based on challenging faulty beliefs (replacing irrational thinking with rational thinking) to resolve emotional and behavioural problems.

Believing that we can think our way out of distress, Ellis developed the ABCDE model, named after the five stages that it involves:

Ellis believed that the therapist was primarily a teacher, and so did not put any focus on the therapeutic relationship.

REBT is considered highly directional and sometimes confrontational, and is based around the personality of the client. Ellis would interrupt, swear and shout as a way of drawing attention to the client’s irrational thinking.

Feltham & Dryden (1993: 31) define CBT as ‘an umbrella term for those approaches based on, related to, or developing from behaviour therapy and cognitive therapy’.

It is a psychological therapy that emphasises thoughts, originally developed as ‘cognitive therapy’ in the 1960s by US psychiatrist Aaron Temkin Beck, who was born on 18 July 1921 and studied at Yale University.

Beck studied and practised Freudian psychoanalysis; when he designed and carried out several experiments to test the effectiveness of psychoanalysis for depression, he was surprised to find that this therapy was not effective. 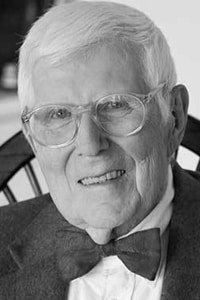 This led him to look into developing an alternative approach. He noticed that counselling clients often had an internal dialogue that was negative and self-defeating.

In contrast to Ellis, Beck took a new approach in terms of stressing that a therapeutic relationship is integral to the therapy being successful, that clients need to discover their own ‘faulty’ thinking, and that it is the client’s disorder rather than the personality that is important.

CBT is a model of ‘faulty’ (irrational) thinking. The thoughts, emotions and behaviours that arise following a person’s perception of a situation can then form a vicious circle, with the unhelpful behaviour then triggering further negative thoughts ...CBT aims to break the vicious cycle through changing either the thoughts or the behaviours – and so to turn it into a virtuous cycle.

In the 1970s, behavioural psychologists and educators started to develop new approaches focusing on acquiring cognitive and behavioural skills so people could self-manage their psychological problems.

Moving into the 1980s, multi-modal behaviour therapy was developed by Arnold Lazarus; this technically eclectic modality is ‘heavily based on a systematic assessment of the way in which clients function’ (Feltham & Dryden, 1993: 116).

Lazarus was originally trained in behaviour therapy but – realising its limitations – ‘began to incorporate cognitive and other strategies into his work’ (Seligman, 2006: 447).

In the modern era, Christine Padesky – joint author with Dennis Greenberger of Mind Over Mood (voted by BABCP as the best-selling client self-help manual) – has made significant contributions to CBT methodology, as recognised in receiving the Aaron Beck award in 2007.

It was Padesky (1995: 4) who first coined the ‘hot-cross-bun model’, which diagrammatically shows how thoughts, emotions, physical feelings and behaviours all interact with each other, within a situation (see below). 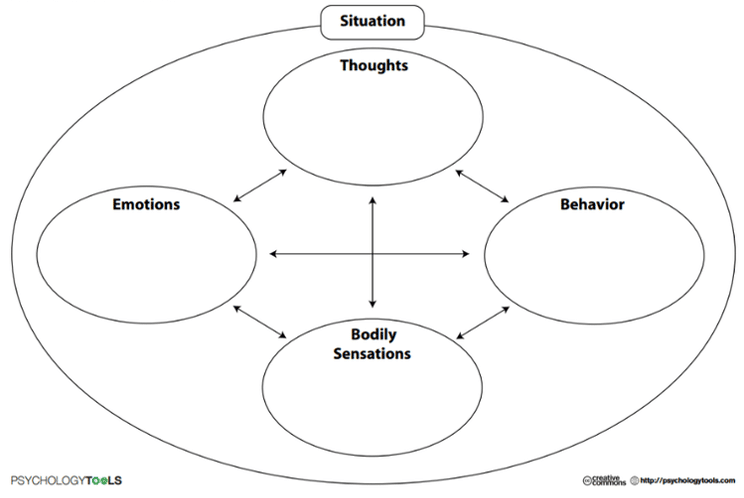 The thoughts, emotions and behaviours that arise following a person’s perception of a situation (CBT therefore being a phenomenological approach) can then form a vicious circle, with the unhelpful behaviour then triggering further negative thoughts.

This is sometimes known as ‘the Mercedes model’ (based on the logo of the car manufacturer, which comprises linking elements forming a circle).

CBT aims to break the vicious cycle through changing either the thoughts or the behaviours – and so to turn it into a virtuous cycle.

The therapist sets tasks and goals – hence CBT (like REBT) is an active-directive approach. For example, clients are encouraged to undertake homework to practise techniques.

Greenberger D & Padesky C (1995) Mind Over Mood: Changing How You Feel by Changing the Way You Think, Guilford