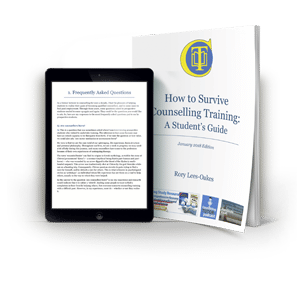 How to Survive Counselling Training (a students guide) is my first attempt at ‘writing’ . I offer you this ‘guide’ with the same mixture of trepidation and heady excitement I experienced on my very first day as a Diploma student at Tameside College in 2002.

The guide was ‘born’ from a number of conversations through the years with colleagues regarding the changing face of counselling and the greater expectations placed on all practitioners be they in training or qualified practice.

How to Survive Counselling Training ebook

In 2002 the counselling world was a different place, the BACP ethical framework had become a unified document which covered trainers, practitioners and students under one ethical umbrella, previously each discipline had its own code of ethics, halfway through training we had buy new ethical guides and have a section of the course re-taught to cover the new framework.

Charities that provided placements for student counsellors had not yet taken the title of ‘The third sector’ a phrase which entered the lexicon of language as a description for the growing ‘corporatisation’ of the charitable sector.

This step change meant that services which had previously been supplied by government sectors such as the NHS and local government were supplied by independent charitable organisation accountable to ‘partners’ a colloquial phrase for funders.

The murder of Victoria Climbié in 1999 and the failure of the many organisations of whom she had contact to identify the risk of harm and to intervene, led to an investigation by Lord Laming which was published in the January of 2003.

The report made uncomfortable reading as it became clear certain areas of the medical and social work profession had not adhered the ‘Caldicott ‘ principles, a set of guidelines published in 1997 defining the limits of confidentiality and crucially when information could have be shared which may have saved the life of Victoria .

This qualification step change signalled that counselling had moved from an ‘emerging’ profession to stand alongside other medical disciplines as a choice of intervention and support. Crucially it also highlighted the growing awareness of a general public who as consumers demanded both high standards , value for money and a route to complain if they felt the service offered did not fit their needs or was not ‘fit for purpose’.

And that brings me back to the guide and my intent to supply a realistic view of what is expected from student counsellors and some of the more practical aspects of building and maintaining a high quality of practice for clients, while retaining your sanity.

I hope it will answer some of your questions and supply the basic fieldwork necessary to underpin your studies and provide a realistic overview of the growing expectations of the profession, because our clients deserve nothing less.

I would like to offer my sincere and heartfelt thanks for those who have supported me in my endeavours they are, Kenneth Kelly for his web wizardry and for supporting me through the ‘wobbles’ of being a virgin writer, Karen Peters, for her kind introduction, attention to detail in editing the guide and being a great ‘supporter’.

A special mention for Deb ‘Detail’ Instone, my friend and fellow teaching ‘pilot’ who brings so much to the counselling teaching provision at Warrington Collegiate.

Finally to all the students who have followed Counselling Resource and now counsellingtutor.com, because you make it what it is.

How to Survive Counselling Training ebook